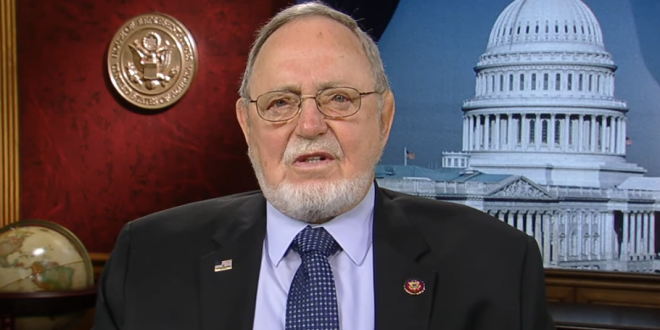 U.S. Rep. Don Young, 87, has tested positive for COVID-19, he announced in a tweet Thursday. Young, a Republican, was first elected in 1973 and is now the Dean of the House, meaning he’s the longest-serving member of Congress. He’s also the chamber’s oldest member.

He photographed at one of his fundraisers not wearing a mask and said he did not require them at his political events.

Young made headlines early in the pandemic when he jokingly referred to COVID-19, a type of coronavirus, as the “beer virus.” He later said he didn’t fully grasp the severity of the virus and the associated public health crisis.

Young last appeared on JMG in 2014 when he apologized after twisting the arm of a congressional aide who had blocked his entrance into a closed meeting.

GOP AK Rep Don Young tests positive for coronavirus. Is oldest member of either body at 87. Is longest serving House GOPer ever

He’s America’s oldest Congressman and the Dean of the House. He was first elected in a special election in 1973:https://t.co/dCHo42nroN

Previous REPORT: Jarvanka Pulled Their Kids From School After Parents Complained About Them Flouting COVID Rules
Next Militia Leader Claims He Has Armed Men Stationed Outside DC And Ready For Violence On Trump’s Orders