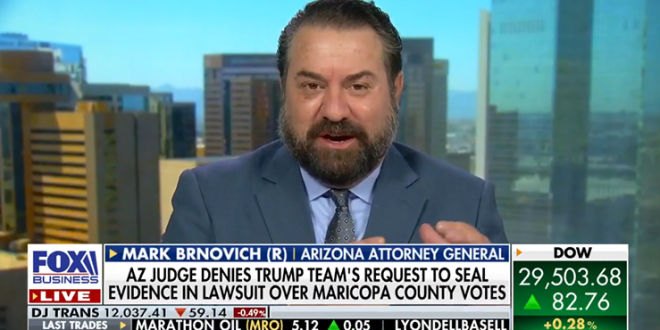 “The reality is, right now, there’s less than 50,000 votes to count and the President would have to get about 65 percent of them to win Arizona, so it does appear that Joe Biden will win Arizona,” Brnovich said.

He also noted that the lawsuit filed by the Trump campaign against state and Maricopa County election officials alleging that poll workers didn’t follow protocols to allow voters to correct mistakes on their ballots would affect less than 200 ballots in the county.

Host Neil Cavuto praised Brnovich, a Republican, for his “nerves of steel and a backbone to match,” delivering news that members of party would likely not enjoy hearing.

Brnovich ended his interview by making the observation that if there was indeed a conspiracy, it failed in securing other elected seats for the Democratic Party.

“The county election official who was Democrat lost and other Republicans won. What really happened, it came down to people split their ticket. People vote for Republicans down ballot, but they didn’t vote for President Trump.”