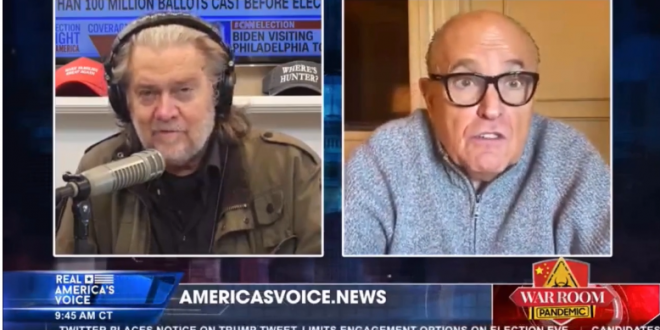 RUDY GIULIANI (GUEST): I don’t think these early votes are going to be as bad as they think. We shouldn’t assume it. We should assume if he has a credible lead — a point or more — we’ll call the state and we should put it in his column and we start off from there and then he should claim victory.

STEVE BANNON (HOST): What time tonight? Mayor Rudy Giuliani, the president’s lawyer, his wartime consigliere, at what time? Between 10 PM and 11 PM does the president of the United States claim victory?

GIULIANI: Can’t say yet. I think they would really criticize us if we said we know in advance when we’re gonna do it. I think we have to consider it, look at it, see what we’re presented with. I mean as early as possible to get the suspense over for the American people. It’s been rare in recent years that we’ve been able to do it by 10 or 11. Usually you try to do it for — I remember when I was running for mayor we would always try do it for the 10 or 11 o’clock news. But we might be able to.

GIULIANI: That would be ideal, Steve.

Previous Zoomvangelical: Christians Must “Release The Aroma Of Christ” In Polling Stations So People Will Vote For Trump
Next Hannity Posts Really Stupid Lie About Rep. Ilhan Omar