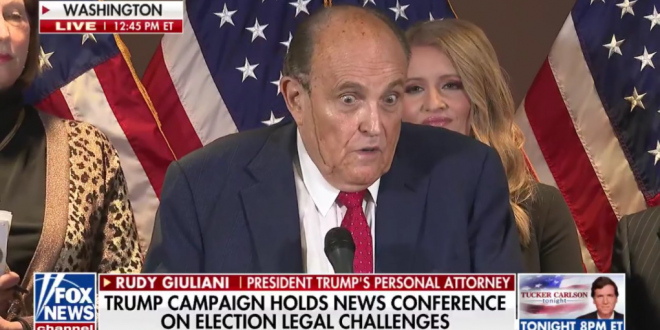 Giuliani Sweats Through His Hair Dye At Lying Presser

A dark fluid dripped down Rudy Giuliani’s head during his Thursday press conference on behalf of the Trump campaign, prompting social media users to speculate what it could be. Giuliani, who was presenting evidence that widespread voter fraud led to President Donald Trump’s defeat in the 2020 election, grew sweaty as he spoke alongside campaign lawyers Sidney Powell and Jenna Ellis. Then, the mysterious dark fluid began to drip from the top of his head across his cheek.

It appears that Rudy Giuliani is sweating through his hair dye. pic.twitter.com/OY3dGL1BtX

What is dripping down the side of Rudy Giuliani’s face? pic.twitter.com/8kWaXQrgLs

Giuliani’s hair dye is melting and running down his face. It looks like something out of a Cronenberg movie.

giuliani’s assertions of voter fraud are as effective as his hair dye pic.twitter.com/0Dbn6wkyjL

Rudy Giuliani, Trump’s personal attorney who is going to save the election for him, literally melts down at bizzaro press conference. It’s either makeup, hair dye, or his brain. pic.twitter.com/1hqe7muszl