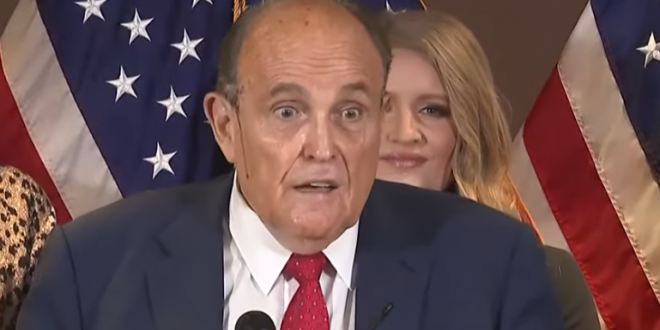 Giuliani Claims To Be Plotting Appeal to SCOTUS

A federal appeals court on Friday rejected President Trump’s request for an emergency injunction to overturn the certification of Pennsylvania’s election results, delivering another defeat to the president’s attempts to reverse the outcome in a state that has already formalized President-elect Joe Biden’s victory there. Jenna Ellis, a legal adviser to Trump’s campaign, said after the decision that the case would be taken to the Supreme Court.

Rudy Giuliani said the legal team was weighing which case would be appropriate to take to the high court. “There are any number of cases that we can take to the Supreme Court,” he said in an interview Friday night on One America News, during which he repeated the same claims that were rejected by the 3rd Circuit panel. “We have to decide which is the right one. There may even be one that hasn’t yet started but will be started in a day or two that might be the right one.”

.@RudyGiuliani and me on Third Circuit’s opinion:

The activist judicial machinery in Pennsylvania continues to cover up the allegations of massive fraud.

We are very thankful to have had the opportunity to present proof and the facts to the PA state legislature.

PA @senatorscarnati: “We will not sit back quietly and allow the liberal left to steal the 2020 election. The foundation of our democracy demands that all elections are fair and legal.” https://t.co/CV2GU4Ods5

Happy Thanksgiving to everyone except the fraudsters who rigged this election! 😊🍁🦃