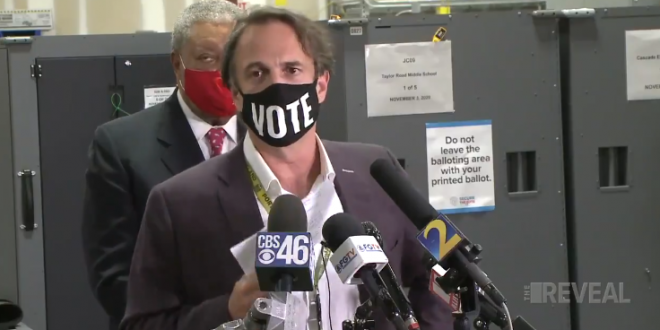 GA Election Worker In Hiding After Doxxing By Cultists

With all eyes on Georgia’s razor-thin presidential vote margin, falsehoods are swirling on social media about supposed ballot counting irregularities there.

Among the most widely shared examples is a video that has racked up millions of views on Twitter. It claims to show a poll worker crumpling up an absentee ballot.

As it turns out, it shows no such thing. Richard Barron [photo], the Fulton County elections director, said late Friday that the poll worker seen in the video was discarding paper instructions, not a ballot, which would have been much larger than the paper seen in the video.

It appears that someone took a video of a video that someone else had recorded in the arena and added narration from a male voice. It is not clear who shot the original footage that the tweeted video was based on.

“He has a fit about something. And then flips off a ballot, and then crumples it up,” the narrator says. “If that is not voter fraud I don’t know what is.”

David Shafer, the chairman of Georgia’s Republican Party, retweeted the video and wrote, “Lawyers for the Georgia Republican Party have demanded that the Fulton County Board of Elections investigate and explain what is happening in this video.”

“He is currently in hiding.” Fulton Election Director Rick Barron says an election worker at State Farm was falsely accused of throwing out a ballot, video uploaded to Twitter and his personal info including car license plate were released #gapol #Election2020 @wsbtv pic.twitter.com/zGs0gq5F5v

A video viewed millions of times on Twitter falsely claims to show an Atlanta poll worker crumpling up an absentee ballot. An election official says the worker did no such thing — and now is in hiding after the false accusation led to online harassment. https://t.co/xehy34Lfuy

A man working at a vote-counting site in Atlanta earlier this week has gone into hiding after being wrongly accused of discarding a ballot, according to Richard Barron, elections director for Georgia’s largest county, Fulton. https://t.co/TBACIoG1JU