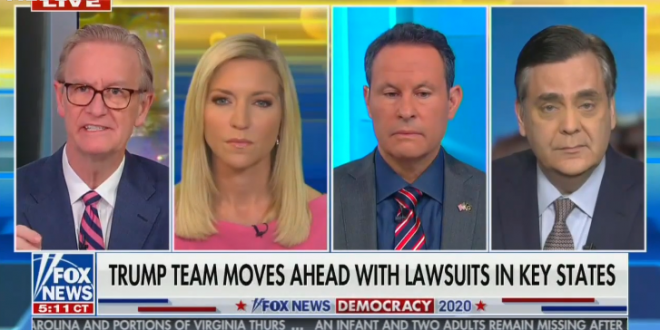 Ordinarily, this would be a relatively pedestrian setting-the-record-straight instance for morning television. But the fact that Doocy is directly countering Fox News colleague Sean Hannity, and President Trump, is a rather remarkable moment for the pro-Trump morning show.

“I looked into it,” Doocy opened, correcting the record. “With that Dominion software, five counties in Michigan and Georgia had problems,” Doocy added, apparently citing a New York Times report that came to the same conclusion.

“And the Dominion software was used in two of the counties and in every instance largely it was human error, a problem, but the software did not affect the vote counts.”

Wow: “lawyer” @JonathanTurley gets fact checked live on Fox News for lying that “In Michigan, you had thousands of votes that were given to Biden that belonged to Trump.” That has to hurt!https://t.co/l6aa1NQSui

These states in question should immediately be put in the Trump Win column. Biden did not win, he lost by a lot! pic.twitter.com/ywiw6sPicI https://t.co/C1g9LZpMah