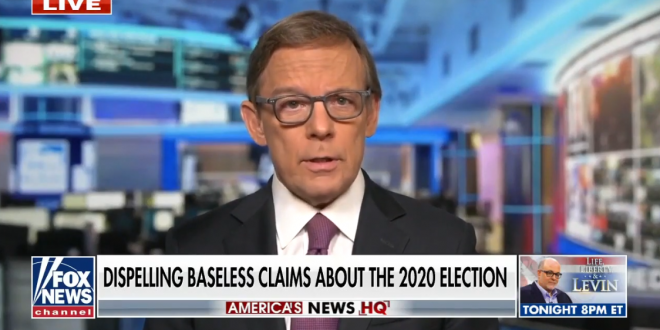 Fox News anchor Eric Shawn on Sunday debunked claims of widespread electoral fraud pushed by President Donald Trump and some of his allies at the network, calling them an insult to the thousands of election officials across the country who worked to ensure the process was free and fair.

The weekend anchor said on “America’s News Headquarters” that the baseless and inflammatory claims about a rigged election were disputed by the government, election officials and voting experts and were “designed to undermine your faith in American democracy.”

He aired video of Ben Hovland, the Trump-appointed chairman of the U.S. Election Assistance Commission, who said that the 2020 election was the most secure in history and among the best-run.

After Maria Bartiromo devoted her entire show this morning to promoting Trump’s Dominion conspiracy, Fox News anchor Eric Shawn debunks it and other voter fraud claims, declaring that “such baseless and false claims are an insult” to election officials and workers. pic.twitter.com/ksM2hGIJqn