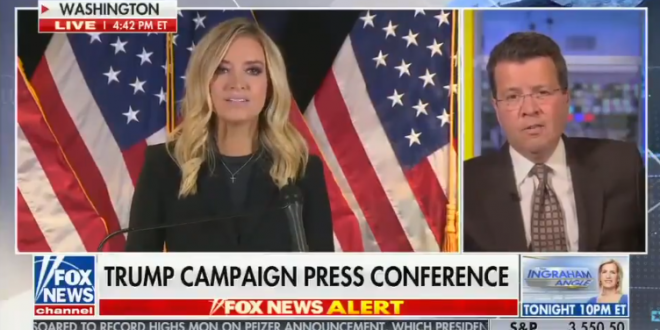 Fox News anchor Neil Cavuto abruptly cut away from a Trump campaign press conference led by Kayleigh McEnany Monday afternoon. Shortly after her baseless allegation that the Democratic party was “welcoming fraud and you are welcoming illegal voting,” Cavuto cut in abruptly by saying “whoa, whoa, whoa, I just think we have to be very clear.”

“She’s charging the other side is welcoming fraud and welcoming illegal voting, unless she has more details to back that up, I can’t in good countenance continue showing this,” he continued.

“I want to make sure that maybe they do have something back that up,” Cavuto added. “That is an explosive charge to make at the other side is effectively rigging and cheating. If she does bring proof of that we will take you back.”

Fox News just cut away from @PressSec, saying the network could not in good conscience continue to air her false claims, for which she has provided no supporting evidence.