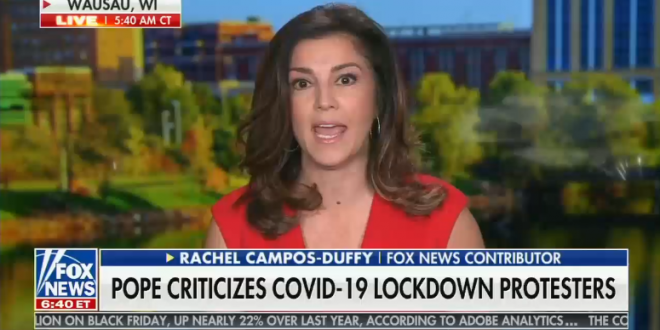 “It was sad because for me as a Catholic to be honest. That op-ed came out on the same day that we had a huge religious liberty victory in our Supreme Court.

“And here we had the Pope come out and call those who were, you know, like Cardinal  Dolan and other Catholics who were celebrating this, he called it selfish for, you know, standing up for our liberties during this pandemic. And then he started parroting these really creepy globalist slogans.

“I think he even mentioned ‘build back better.’ He talked about climate change. Never talked about religious freedom. He started promoting, as so many other globalists, have this ‘great reset,’ using the pandemic to advance, you know, reordering our economic system.

“That’s what I wish my Pope would step in and talk about that because that’s what’s lacking in America and in the world. Capitalism is a wonderful thing but it does need Christian ethics, you know, Judeo-Christian ethics to temper it.” – Rachel Campos-Duffy, Fox contributor and former reality show cast member.