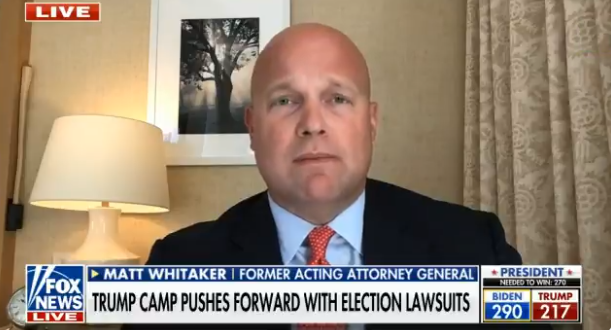 Former acting Attorney General Matt Whitaker baselessly said that “thousands of dead voters voted” in Nevada during a Wednesday interview — a claim which was met with no pushback from Fox News anchor Harris Faulkner.

“We have places like Nevada where thousands of dead voters voted who shouldn’t have. There were other potential illegal votes,” he said. “Each of these needs to be adjudicated to see if it makes a difference in the outcome.”

Former Congressmen Jason Chaffetz made a similar claimed during a Fox Business interview with Lou Dobbs — pushing for the FBI to investigate the 3,000 dead people who voted in Nevada.

Whitaker, you may recall, once marketed a toilet specially built for men with extra large genitals.

There is absolutely no proof of this. At all.

Despite the fact that no evidence has been provided, and that dead people are incapable of voting (on account of their deadness) former Trump Acting AG Matt Whitaker claims that 1000s of dead people voted in Nevada.

Also, they shouldn’t have.

The Derp State is real. pic.twitter.com/G7AARH64HY