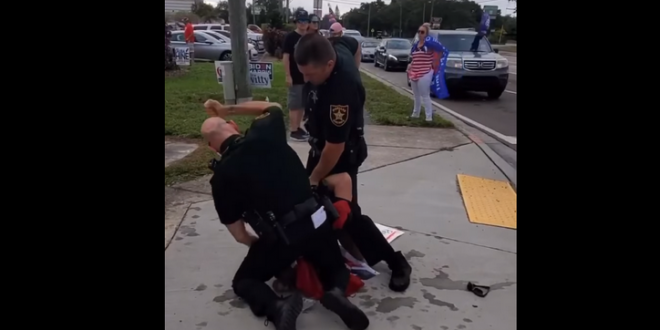 A video showing the arrest of a Clearwater man during a political rally in Palm Harbor has raised concerns over a deputy’s use of force. The video shows deputies punching a Joe Biden supporter in the head and elbowing him in the back multiple times as he’s being held to the ground.

Scott Rexroat draped himself in a Confederate flag and wore a face shield with a picture of President Donald Trump’s face on it. The 59-year-old musician held signs critical of Trump. A woman who asked not to be named for fear of retribution recorded the arrest.

“The police went from behind him and grabbed his arm. And he didn’t know who was after him. And he was saying I didn’t do anything and the cops proceeded to beat the, stomp the living out of him,” she said. “It was horrible. It was absolutely horrible.”

No one deserves this treatment at the hands of law enforcement. And Sheriff Gualtieri says there’s no police brutality in Pinellas County. This happened today to an older man who was protesting Trump in Palm Harbor, FL. Time to vote for a new sheriff! pic.twitter.com/1sW6HH5DVb