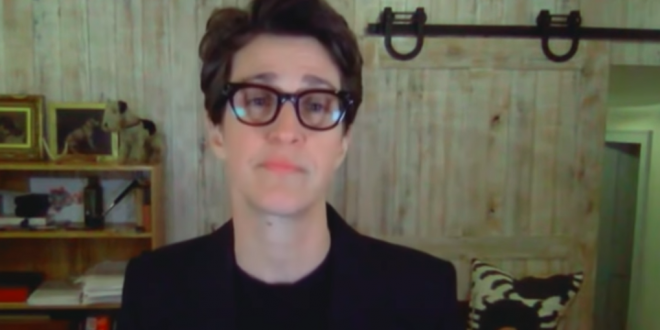 Emotional Rachel Maddow Reveals Partner’s Struggle With COVID: “We Really Thought That It Might Kill Her”

After being off the air for two weeks, MSNBC’s Rachel Maddow made an emotional return Thursday night, telling viewers her partner, Susan Mikula, “the center of her universe,” has COVID-19. Maddow said that “at one point, we really thought there was a possibility that it might kill her,” and urged viewers to “do whatever you can to keep from getting it.”

Mikula was diagnosed two weeks ago, Maddow said. The day Mikula tested positive, Maddow said she tested negative, and the two have physically kept apart since. Maddow said Mikula got “sicker and sicker” over the past two weeks but is starting to recover.

Speaking directly to the audience, an impassioned Maddow implored people to take the virus more seriously, if not for themselves then for their loved ones.

“Don’t get this thing. Do whatever you can to keep from getting it,” Maddow said. “For Thanksgiving next week, you really are just going to have it at home without people coming over. Yeah that’s going to suck, but it’s going to suck so much less than you or someone in your family getting sick. Trust me,” she added.

On returning to the studio to host her show, Maddow didn’t offer a return date, saying that she won’t return “until it’s safe to be around my co-workers.”

Maddow: Don’t get this thing. Do whatever you can to keep from getting it.

Rachel Maddow reveals that her partner, Susan, tested positive for Covid-19 and is still recovering, and implores viewers to consider their loved ones when they calculate their own Covid-19 risk. pic.twitter.com/oUz2DBLG63

Previous TODAY: Pfizer To Seek Vaccine Approval From FDA
Next Tucker Carlson Blasts Trump Lawyer Sidney Powell: She Has Refused To Send Us One Page Of Evidence [VIDEO]