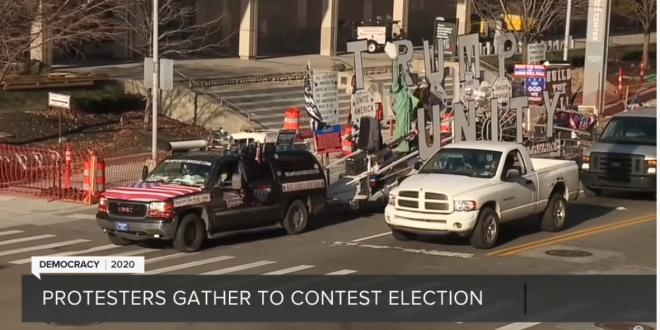 Police warned a group of squabbling Trump supporters and counter demonstrators to separate in downtown Detroit on Friday night — with law enforcement eventually closing the roads — and the owner of a giant, traveling shrine to the president was briefly arrested and his vehicle was impounded.

The protest broke up just before 10 p.m., police said, after a tense and often bizarre day that included an evening investigation of a false bomb threat at the convention center.

The day began with the abrupt closing of the Wayne County Treasurer’s Office after threats to “storm the building,” police said. Detroit is the Wayne County seat. Detroit Police Chief James Craig said the police had intelligence that armed groups would come to the city on Friday.

Trump supporters quickly drum up donations to bail out the driver of the Trump Unity Bridge after this morning’s arrest & impound #Detroit #DetroitProtests #Trump pic.twitter.com/4ugm22iABp

A couple protesters confront the driver of the Trump Unity Bridge in Detroit #Detroit #Michigan pic.twitter.com/V1U6lGh7Lo

The driver was downtown on Friday morning and afternoon for protests over the election, when police arrested the driver on outstanding traffic warrants in Canton.https://t.co/bkoY4fAYkx

He should have complied.

Blaring a Kid Rock song, a man driving a truck with “Trump Unity” & “Build the Wall” signs keeps on circling TCF Center in Detroit – where ballots are being counted – saying with loudspeaker the valid election vote was yesterday: “Validate the vote from the election yesterday.” pic.twitter.com/Sifzk2EcQu