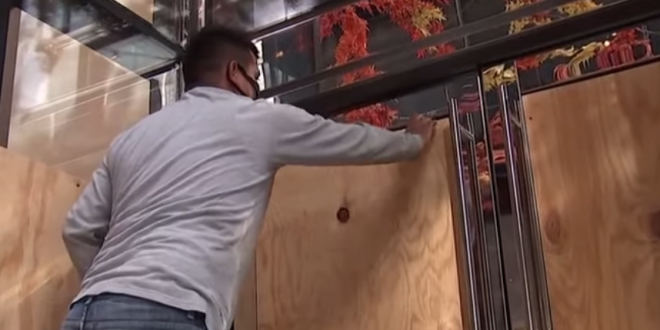 DC And NYC Businesses Board Up Ahead Of Election

DC businesses are boarding up ahead of expected demonstrations throughout the week of the 2020 Election. Despite the wet weather Sunday morning, workers near Black Lives Matter Plaza were busy erecting more plywood barriers over some buildings’ windows.

If you didn’t know any better, you could be forgiven if you thought they were prepping for a big storm about to blow into the nation’s capital. In a way, you might be right. Or you might not be. As with the weather, the events of Election Week 2020 are unpredictable.

The National Park Service says many groups have applied for permits to demonstrate on or around Election Day. With thousands expected in the streets, including law enforcement, will everything remain peaceful?

Some Manhattan businesses boarded up their storefronts over the weekend, fearing demonstrations or unrest in the wake of Election Day on Tuesday. Shops in SoHo and the Village have also covered their storefronts in plywood after experiencing looting during protests over the summer.

NYPD Commissioner Dermot Shea said while the department isn’t recommending businesses board up, it has asked shops in some areas, especially Midtown, to move objects like furniture, clothing racks, dumpsters and small planters from sidewalks.