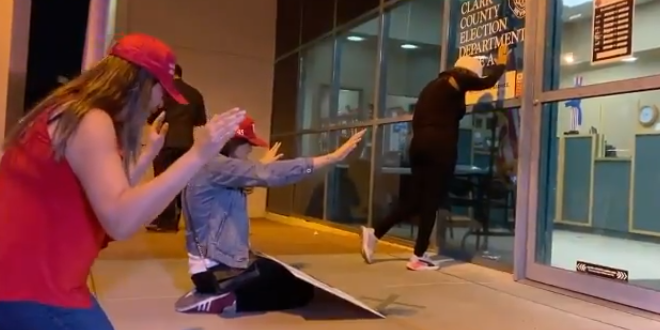 A second night of protests on Thursday outside the Clark County Election Department attracted a large, vocal crowd claiming fraud in Nevada’s count. The #StopTheSteal protest to fight against what organizers allege is “election fraud” began at 6 p.m. outside the election department office in North Las Vegas, and grew in size as the protest went on.

At least one protester was seen walking around with a large yellow Proud Boys flag. Organizers asked people to share their experiences of witnessing voter fraud during the election. A protester in a MAGA hat was also seen shining a strobe light into the eyes of the counter-protester and an ABC reporter.

Women just arrived at the Clark County election department. They tell me they’re praying justice will be done and that righteousness prevails. pic.twitter.com/xi0Q9hOS51

“We want a fair, open, honest and transparent election and right now we do not have that,” Mike Coudrey saidhttps://t.co/w4KQagc2yx