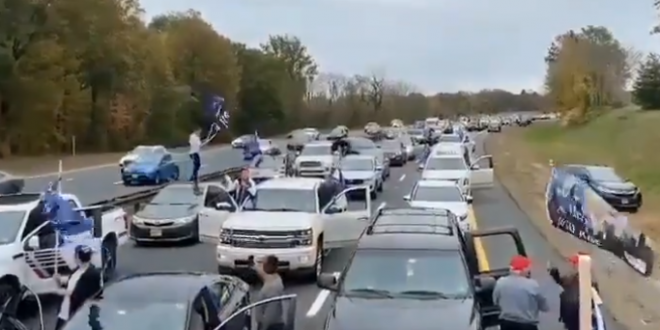 In a show of support of questionable political value, pro-Trump demonstrators clogged freeways Sunday across the country, from New Jersey and New York to Texas, Arizona, and Washington state. “WHOOO! We shut it down baby! We shut it down!” says one pro-Trump videographer as he pans the camera nearly 360 degrees, showing viewers the group of cars that had brought traffic to a complete standstill along the northbound Garden State Parkway in New Jersey.

“You suck, you suck, everyone on the right lane sucks,” nearby driver Maddy Pryor says in another video capturing the incident, which Pryor posted to Twitter. Another user named @kabryant17 claimed the stoppage caused emergency personnel to take a delayed route to the hospital, as the pro-Trump demonstration blocked an entire freeway exit. The president’s supporters also uploaded videos of caravans of vehicles flying large ‘Trump 2020’ flags under the hashtag #MAGADragTheInterstate on Sunday.

Isis & The Trumpian Taliban kissing in a tree. Awww. pic.twitter.com/xv3b17YUKq