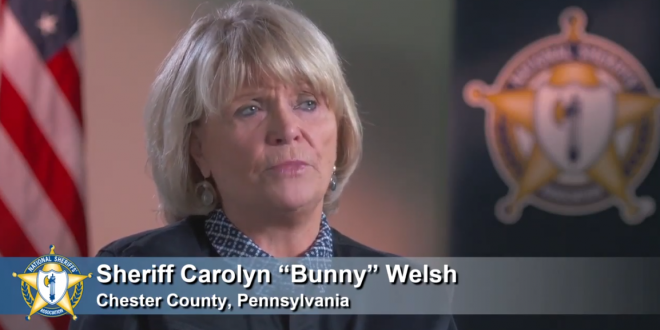 As sheriff in Chester County, Pa., Carolyn “Bunny” Welsh was among President Trump’s earliest boosters in the key swing state. In 2016, Welsh attended the Republican National Convention as a delegate, spoke at rallies and even helped her ailing mother cast an absentee ballot for Trump from her deathbed. After Trump’s win, Welsh made multiple trips to the White House, where she often nabbed a spot at Trump’s side as he met with other law enforcement officers.

“They seated me right next to the president. It was wonderful,” Welsh told the Philadelphia Inquirer in 2017. “He was very open and very gracious.” Now Welsh, a 76-year-old Republican who left office last year after two decades as sheriff, has been charged with theft for an alleged scheme to charge taxpayers for volunteer work benefiting a K-9 unit. Welsh’s boyfriend, Harry McKinney, a former officer in the department, is also charged with using donations to the K-9 unit to pay his personal expenses.