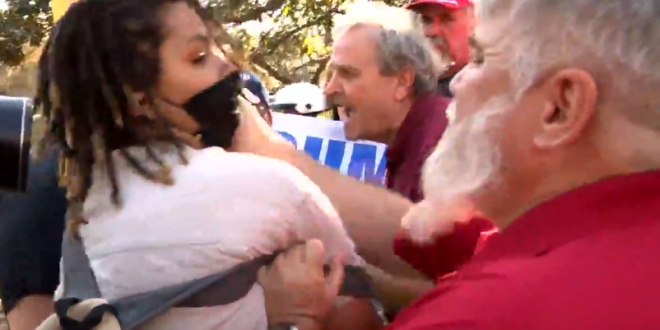 A Pensacola man has been arrested for allegedly pulling off a woman’s face mask during a weekend rally in downtown Pensacola in support of President Donald Trump.

“He grabbed her mask — her COVID-19 mask — and pulled it off her face,” Wood told the News Journal. “That’s battery. You can’t do that.” The incident occurred about 3 p.m. Sunday at the “Stop the Steal” rally at Plaza Ferdinand VII park.

#DEVELOPING: Things turn ugly at a “Stop The Steal” Trump rally in Pensacola. A Trump supporter snatches a mask from a woman’s face after she and another man attempted to convince the crowd to accept the results of the Presidential race. @RebekahCastorTV with more at 4,5,6&10-PM pic.twitter.com/l0nfwUXYaN