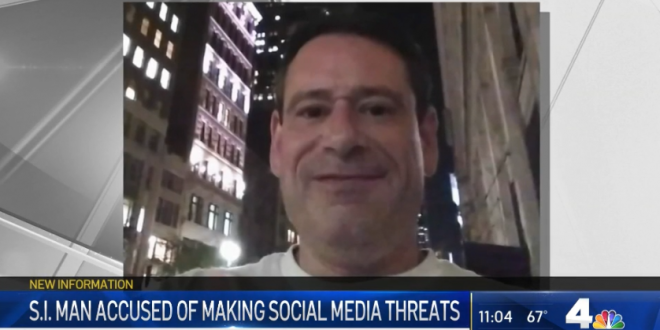 On Sunday, as votes were still being tallied in one of the most hotly contested elections in United States history, Brian Maiorana took to social media with a dark and violent message, prosecutors say. Citing the anti-government novel “The Turner Diaries,” in which Jews and nonwhites are exterminated, Mr. Maiorana wrote that he wanted to “blow up” an F.B.I. building and made an anti-Semitic reference to “the Jew Senator from Jew York,” a veiled threat apparently directed at Senator Chuck Schumer, the Democratic leader.

In an early morning raid Tuesday, the authorities arrested Mr. Maiorana, 54, at his house on Staten Island. Later in the day, he was charged in court with making threatening interstate communications. Tuesday evening, he was brought before a magistrate judge in Brooklyn federal court who ordered that he be detained pending a bail hearing. Prosecutors said that starting in September, Mr. Maiorana had used a social media platform to post multiple threats to kill protesters, politicians and law enforcement officers.

Back in June, responded to a post on a New York militia website under the name “Proud Patriot Sailor” that he had ordered a machine “to start manufacturing implements of war,” the charges read, describing the device as a part for making a gun.

Maiorana was previously convicted in 2007 of statutory sexual assault, and is a registered sex offender in New York. He had a pistol permit issued in Orange County in 1992, but given his felony conviction, is still prohibited from owning any guns or ammunition.

Financial records show that Maiorana bought gun parts for a semi-automatic handgun in June and July earlier this year, court papers said, and that in Nov. 2018 he purchased a crossbow as well as combat boots and various military patches.

“Maiorana posted that “The Turner Diaries must come to life. We blow up the FBI building for real. All the alphabet agencies assassination will become the new normal now . . . that the electoral process is finished.” https://t.co/eWRaLrMSVt

An armed, Staten Island sex-offender upset about the presidential election results threatened to bomb protesters and kill Democrats — including a US Senator from “Jew York,” an apparent reference to Sen. Chuck Schumer. https://t.co/oeg1OUp3za