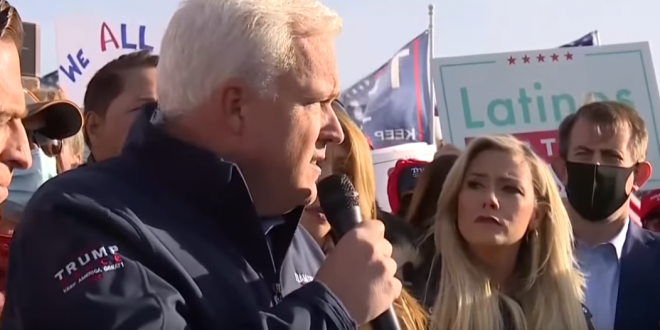 Trump campaign surrogate and American Conservative Union chairman Matt Schlapp touted a bonkers conspiracy theory on Sunday night at a press conference in Las Vegas, Nevada, claiming a man told him a Joe Biden and Kamala Harris “van” showed up at a polling location during the day and swapped out ballots.

“These people who were involved in this activity then decided to create a human shield around what they were doing in the van,” Schlapp stated. The Trump campaign surrogate at the presser didn’t provide any proof of the alleged incident involving a mysterious van and failed to respond to reporters’ questions at the press conference.

“A van pulled up at the center marked Biden and Harris, the doors of the van were open, ballots were clearly visible, ballots were opened with letter openers, and ballots were filled in and resealed in envelopes.” – Matt Schlapp @mschlapp pic.twitter.com/28q23vJ74C

Truly deranged stuff at this Trump camp press conference in NV. Matt Schlapp cites an unnamed “whistleblower” in a counting center who saw a Biden/Harris van pull up, unload ballots, open them with a letter opener, swap votes, and replace them — all apparently in plain sight! 🤡