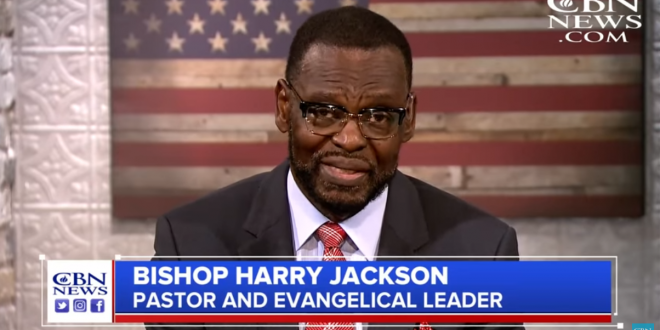 Bishop Harry Jackson Jr., a prominent conservative pastor and evangelical adviser to President Donald Trump, has died, according to his church. Jackson died Monday (Nov. 9), according to a statement posted on the website of Hope Christian Church in Beltsville, Maryland, where he was pastor.

Rickardo Bodden, chief of staff of Hope Christian Church, told Religion News Service he did not know the cause of Jackson’s death.

Jackson and a number of other faith leaders had attended a September 26 White House ceremony where Associate Supreme Court Justice Amy Coney Barrett was announced as President Trump’s nominee to fill the seat vacated by the death of Justice Ruth Bader Ginsburg.

As longtime readers may recall, I’ve been reporting on Harry Jackson’s anti-LGBT actions for nearly the entire existence of JMG.

There’s too much to recount here, but some lowlights include the time he claimed to have laid hands on a Washington Blade newsstand and “cursed” the LGBT newspaper into bankruptcy.

That was in 2010 and the Blade remains in operation.

In 2011, Jackson falsely claimed to be a DC resident in order to have standing to challenge that city’s legalization of same-sex marriage. In 2012, Mother Jones revealed that NOM had paid him $20,000 to fund that attack.

In 2013, he claimed that polygamy “would automatically become legal” if the Supreme Court struck down Prop 8. (Jackson filed an amicus brief in the case with NOM’s help.)

Jackson once said that same-sex marriage was a plot by Satan to “destroy our seed” (whatever that means) and that gays are like “wolves in the dog park.”

And of course, Jackson was part of that group of cultist evangelicals who famously “laid hands” on Trump in the Oval Office in a event that Trump later privately ridiculed.