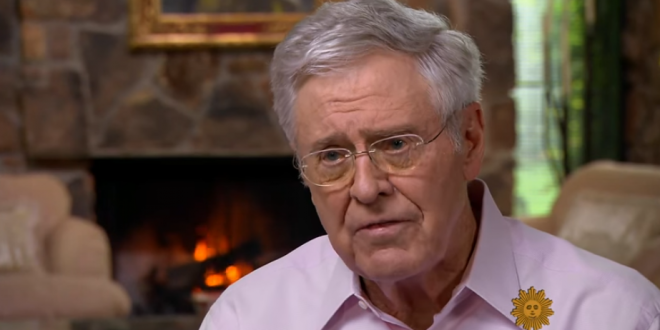 Charles Koch Is Sorry About “Screwing Up” America

Kansas billionaire Charles Koch now says that he regrets his partisan spending—admitting in his new book that it only made things worse, according to The Wall Street Journal.

The 85-year-old tycoon’s book, Believe in People: Bottom-Up Solutions for a Top-Down World, says that he is shifting his focus from intense Republican partisanship to finding unifying answers to social issues instead.

“Boy, did we screw up!” Koch writes. “What a mess!” He now wants to work together with Democrats and liberals like the American Civil Liberties Union.

The original WSJ article is behind a paywall.

Charles Koch’s regrets: In a rare interview, the libertarian billionaire concedes that his GOP partisanship and activism badly deepened America’s divisions. As he puts it in his new book, “Boy, did we screw up! What a mess!” https://t.co/yX69bpndOU via @WSJ

Previous Trump: No COVID Vax For NY Until Cuomo Says So
Next Trump’s Favorite Rapper “Little Pimp” Did Not Vote