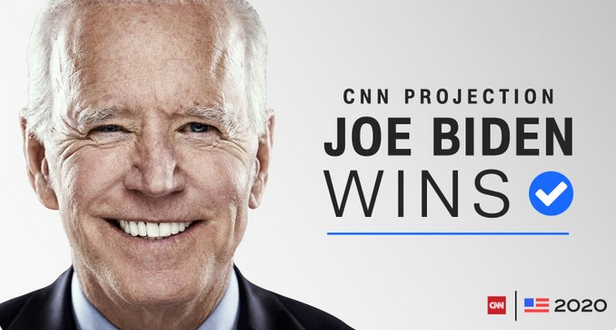 Joe Biden will become the 46th president of the United States, CNN projects, after a victory in the state where he was born put him over the 270 electoral votes needed to win.

Throughout his campaign, Biden has argued that the “soul of the nation” is at stake, and has promised that he would seek to heal a country fractured by Trump’s presidency/

Joe Biden will be the 46th president of the United States, CNN projects, after a victory in Pennsylvania puts the Scranton-born Democrat over 270 https://t.co/3BuAr574GM #CNNElection pic.twitter.com/ewnnJquLPC

America, I’m honored that you have chosen me to lead our great country.

The work ahead of us will be hard, but I promise you this: I will be a President for all Americans — whether you voted for me or not.

I will keep the faith that you have placed in me. pic.twitter.com/moA9qhmjn8