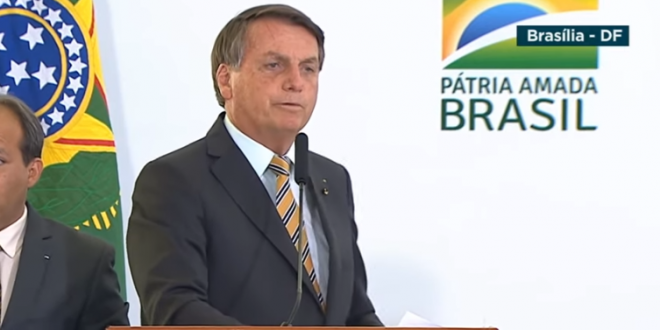 President Jair Bolsonaro drew criticism Tuesday for telling Brazilians not to deal with Covid-19 like “a country of fags,” the far-right leader’s latest controversial outburst on the pandemic.

Bolsonaro, who has consistently downplayed the virus even as it has killed 163,000 people in Brazil,  made the comment during a meandering speech at the presidential palace in which he also appeared to threaten US President-elect Joe Biden.

“All anyone talks about these days is the pandemic. We need to stop that,” said Bolsonaro during the speech, which was ostensibly on tourism. “I regret the deaths. I really do. But we’re all going to die someday. There’s no use fleeing reality. We have to stop being a country of fags. We have to face up to it and fight. I hate this faggot stuff.”

“Diplomacy isn’t enough. When the saliva (dialogue) is over, you must have gunpowder” pic.twitter.com/Qcqf4DPPLs

During a speech, President Jair Bolsonaro hit out at U.S. President-Elect Joe Biden’s comments about deforestation in the Amazon, saying that “when the saliva runs out, there must be gunpowder.”pic.twitter.com/F70QbGALO6