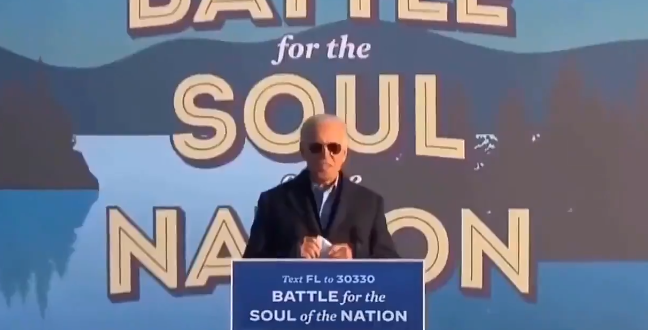 “Hello, Minnesota!” Biden says after taking the stage. Behind him, a sign appears to read, “Tampa, Florida” and “Battle for the Soul of the Nation.” Biden continues, “Jessica, thank you for being here, for sharing your story.” Then, the 16-second clip ends.

The video had more than 900,000 views on Twitter on Sunday and was spreading quickly the weekend before the U.S. presidential election. However, the words on the sign and the podium in this video have been manipulated. Several sources prove that Biden did not address the wrong state in his greeting and he was indeed in Minnesota.

There are other contextual clues as well. The video shows Biden wearing a thick coat for Minnesota’s cold climate. At a recent appearance in the warmer Tampa, Florida, on Oct. 29, Biden only wore a suit jacket.

The Prince music is also a giveaway.

Because Minnesota and Florida are so hard to tell apart in November… pic.twitter.com/rrxYOXS7tt

With the giant ‘Tampa, Florida’ sign behind him. pic.twitter.com/6LtKdie38M