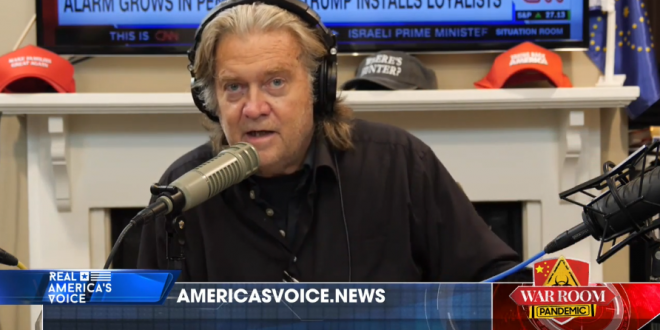 Bannon Issues Call For “Patriots” To Die For Trump

On Veterans Day, former White House chief strategist Steve Bannon referred to a 19th century poem to surreptitiously call for Americans to fight and die for a second Trump term.

For years, Bannon has cloaked his extremist positions with obscure and pretentious references. In this case, his co-host Jack Maxey read an excerpt from “Lays of Ancient Rome,” a poem by 19th century British imperialist Thomas Babington Macaulay.

The excerpt read by Maxey on the show describes the inevitability of death and the glory of dying for your country. Bannon connected the quote to the current crisis in the United States election, using the reference as a call to violence to President Donald Trump’s supporters in Michigan, Pennsylvania, and Georgia.

Steve Bannon suggested that Americans should fight and even die for a second Trump term https://t.co/JZEz6v9YWh pic.twitter.com/dL0Byxk1V3