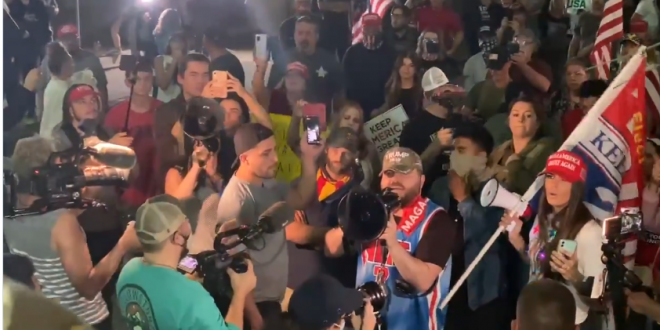 Several hundred protesters gathered outside of the Maricopa County Elections Office on Wednesday night as the votes from the 2020 elections continued to be counted. The group had gathered around 7:30 p.m. and attempted to get inside the office, according to ABC15.

Protesters could be heard chanting “count those votes” and chastising Fox News Channel for calling Arizona for Democratic candidate Joe Biden on Tuesday, which was the first network to make that call. The crowd also voiced concerns over if ballots filled out with permanent marker were being counted.

Around 9:45 p.m., Maricopa County Sheriff’s Office deputies could be seen wearing tactical gear as the crowd continued to grow outside of the elections office.

This group of people outside just keeps growing. They just finished saying the Pledge of Allegiance. @RepGosar now in the crowd. #ABC15 pic.twitter.com/bkcVLytGR3

We just left the building. Still a growing crowd outside as we pulled away. Throughout the night, I spotted several men and women carrying weapons on them. I’m told @MaricopaVote tells me they will be reporting results closer to 11:30 tonight. They’re safe though. https://t.co/fLhDbRjsYG

HAPPENING RIGHT NOW: A group of Trump supporters is currently outside the @MaricopaVote election center. They are demanding their votes be “counted.” They say they’ll be here everyday until their voice is heard. pic.twitter.com/LZ7v1jx8wo

Staff at the @maricopacounty Elections Department will continue our job, which is to administer elections in the second largest voting jurisdiction in the county. We will release results again tonight as planned. We thank the @mcsoaz for doing their job, so we can do ours.

A CNN reporter is on TV saying Maricopa officials are forming an “exit plan” b/c there’s an armed mob outside the elections office. Ballot counters are going to be trying to leave the building soon. Their cars are in a parking lot filled with Trump supporters; some have guns.

Where is the National Guard? Where is the pepper spray? Where are the rubber bullets? pic.twitter.com/BxrXDb1HYr

Maricopa County Sheriff’s deputies now ready in tactical gear inside the elections center to potentially make a move on the protesters and demonstrators outside as the crowd continues to grow. #azfamily #arizona pic.twitter.com/XAhvE1hbIK

A crowd outside of the Maricopa County Elections Dept. chants “Fox News sucks” for calling Arizona for Joe Biden amid a tightening vote count: pic.twitter.com/00CEb3mitH

A look at the growing crowd of hundreds of protesters and Trump supporters outside the Maricopa County Elections Center.

Sheriff’s deputies moved us media back inside for safety concerns. #azfamily #arizona pic.twitter.com/tFYb1cscdw

.@RepGosar has been denied entry into the Maricopa County elections center. pic.twitter.com/gg64viCKn0

An armed mob of ruling party regime supporters are threatening election poll workers trying to count the vote. No, not in Belarus or Russia. In Maricopa County, Arizona.