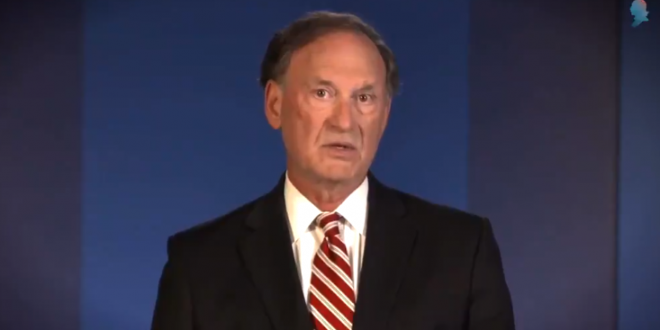 Speaking to a virtual conference of conservative lawyers, the George W. Bush appointee made no direct comment on the recent election, the political crisis relating to President Donald Trump’s refusal to acknowledge his defeat or litigation on the issue pending at the Supreme Court.

However, Alito didn’t hold back on other controversial subjects, even suggesting that the pressure Christians face surrounding their religious beliefs is akin to the strictures the U.S. placed on Germany and Japan after World War II.

Ironically, Alito began his pre-recorded address by condemning an effort by the U.S. Judicial Conference to forbid federal judges from being members of the Federalist Society. He then praised, by name, the four judges who spearheaded a successful effort to defeat the ban—or, as Alito put it, who “stood up to an attempt to hobble the debate that the Federalist Society fosters.”

And here is Justice Alito defending Masterpiece Cakeshop’s Jacks Phillips for refusing to bake a cake for a same-sex couple. Alito notes that the couple was offered a free cake elsewhere, then supported by “celebrity chefs.” pic.twitter.com/hZxdFJHyEI

Probably the strangest aspect of Alito’s speech, other than his attack on COVID restrictions, was his claim that people who oppose same-sex marriage get called “bigots” and this somehow threatens freedom of speech. But how?! Public criticism is not censorship! He knows this!