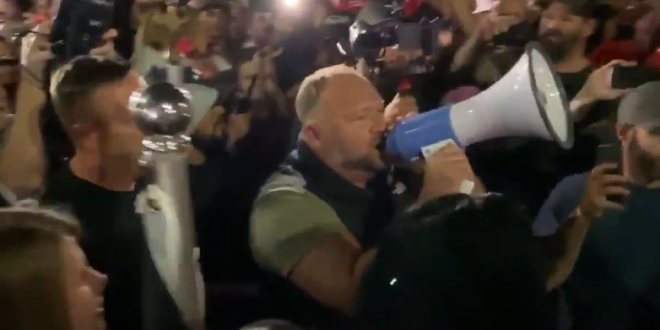 Far-right conspiracy theorist Alex Jones said he spoke at a November 5 rally against Arizona election officials and ballot counters after receiving encouragement from people at the White House and from a former Trump administration official. During his deranged speech outside the Maricopa County Elections Department, Jones issued several threats and hyped the prospect of violence against President Donald Trump’s political opponents.

Mentioning George Soros, Bill Gates, and Jeff Bezos, Jones said “we’re going to take it directly to those scumbag Nazi bastards before they kill this country, just like we did Hitler. And they’ll be in their goddamn bunkers when we come for them, they will be hiding, they will pay, they will be destroyed.” The Infowars host then hyped the prospect of mass violence against those who would steal the election from Trump.

Alex Jones just showed up at the Maricopa County election center to do his batshit crazy thing…pic.twitter.com/kMNZrLa4fr

🚨 Alex Jones is now in Maricopa county, Arizona at the election center! 🚨pic.twitter.com/jWFfMvGR9o