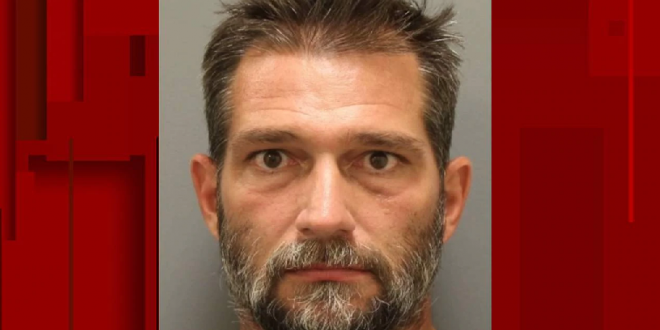 A verbal argument erupted between the victim and supporters of President Donald Trump outside the Buc-ee’s store in the 2800 block of South I-35E, Denton police said. Jason Lata, 44, punched the victim in the face and left the store’s parking lot, police alleged. The victim suffered an abrasion below his right eyebrow and a broken tooth.

Viral video of the incident shows a man in a hat yelling profanities at the victim and screaming “Turn it off!” as an anti-Donald Trump rap song by YG appeared to be playing in the background, according to the Associated Press. The suspect, who was standing with other men who were wearing Trump T-shirts, then punched the victim in the face, the AP reported.

Lata was arrested on suspicion of assault causing bodily injury. He was at the City of Denton Jail late Saturday. Bail was set at $15,000. Officers were dispatched to a hospital about 12:45 p.m. and interviewed the victim.

Violent Trump supporter at a rally in Texas assaults a peaceful counter-protester pic.twitter.com/s950Q3kgTj

Which means this guy really doesn’t like having his personal info tweeted.

Would be a real shame if people set reminders to tweet about said arrest in 6 months.

The MAGA thugs never look as confident in their mugshots.

This is Jason Lata. He’s the dude who sucker punched a protestor in a video that went viral yesterday.

UPDATE | The suspect in today’s assault is in custody. Jason Lata, 44, was arrested after Denton PD detectives obtained an arrest warrant for assault causes bodily injury. Lata is currently in the City of Denton Jail. Bail is set at $15,000. https://t.co/WaLhuINTvz

Castle Creek Christian Academy is where Erin Lata, wife of #JasonLata, works. Is sucker punching someone who disagrees with you part of your “Christian” values? It’s not part of my Christianity. Love your enemies is the word of Christ by the way. https://t.co/RTkgNKVgPt