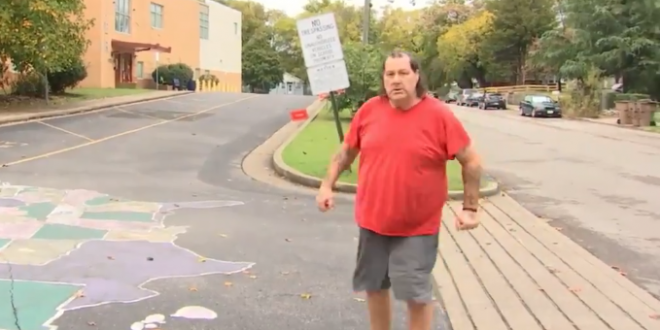 Caresse Jackman, Consumer Investigative Reporter for Nashville NBC affiliate WSMV’s News 4, was being filmed by her cameraman in front of Napier Elementary School for a report on a group of women who are making “masks with love” for the kids when a red-shirted man approached them.

What followed was an assault that was, by turns, harrowing and comical as the man wordlessly attacked the cameraman (apart from grumbling “I told you!” as he began the attack), then wound up on his ass after losing what could only generously be described as his balance.

While shooting video for a feature story-a man from across the street kept looking our crew. We never said a word to him. I got out of the car to record. He started to approach me. My photog tried to get his attention so he wouldn’t come my way. The man then attacked us. @WSMV pic.twitter.com/jXci2WllYK

I grabbed my phone to document it and told the man to leave my colleague alone. The man then punched my coworker. We got away, went to a safe location to call our managers and also called police. We’re okay. If you’ve seen this man or know him–please call MNPD. pic.twitter.com/OXtAdbL9lg