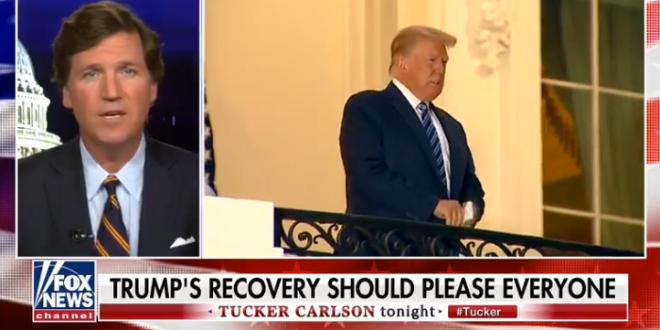 Tucker Carlson: Trump’s “Recovery” Proves The Media Is Lying About How Dangerous COVID Really Is [VIDEO]

“You don’t need to be a Trump partisan to feel good about the President’s recovery, you just need to be a decent person. The moment you find yourself rooting for another man’s illness or death is the moment you need to stop immediately in your tracks, pause and take stock of your soul.

“You’re the one who’s sick and badly in need of help, you’re rotting from within. But the media are not stopping, they’re not even pausing. They’re too angry. Donald Trump is alive. They were hoping that wouldn’t happen.

“Worse, Trump walked out of the hospital under his own steam after just three days. 74 years old and the virus didn’t really slow him down. In fact, he looks fine.

“These are dangerous facts. If you’re allowed to think about them too much, you might draw the wrong conclusions. You might conclude the coronavirus isn’t quite as scary as they’re telling you it is.

“You might regret giving up your constitutional rights in a panic last spring or letting them destroy the American economy in response. You might find yourself enraged that they’re keeping your kids from getting an education and have for six months.

“And above all, you might stop believing the news media. Why are we watching this crap? It’s not news, it’s propaganda. They’re lying to us.” – Tucker Carlson, on last night’s show.