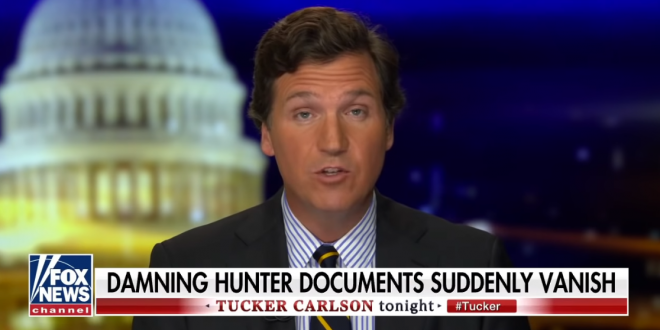 Fox News host Tucker Carlson, who has devoted the lion’s share of his airtime recently to allegations of corruption surrounding Hunter Biden, insisted on Wednesday night that he was in possession of more damning Biden evidence but that the “confidential documents” were intercepted at a shipping center.

“So on Monday this week, we received—from a source—a series of confidential documents related to the Biden camp,” Carlson said. “We believe those documents are authentic, are real, and damning.”

“But the Biden documents never arrived in Los Angeles,” Carlson continued. “Tuesday morning we received word from the shipping company that our package had been opened and the contents were missing. The documents had disappeared.”

Carlson said a producer had shipped the documents to him from New York to Los Angeles via a “brand-name company”. When they didn’t arrive, the shipping company told Fox that their package had been opened and the documents had “disappeared”.

“To its credit, the (shipping) company took this very seriously and immediately began a search,” said Carlson, adding that they traced it back from the moment it was dropped off by the producer in Manhattan to 3.44 am on Tuesday morning.

“That’s when an employee at the sorting facility in another state noticed that our package was open and empty,” he claimed. “Those documents have vanished. As of tonight, the company has no idea and no working theory either about what happened to this trove of material.”

Why the fuck didn’t you just email them pic.twitter.com/bSIxTrIchb

If I understand the implications of his argument, I believe Tucker is arguing the Deep State ate his homework. Or something like that. https://t.co/BxqnFT4hyx

Good job in getting the Very Important Documents, team. Now nobody will get in the way of our Plan to install Biden and implement Full Communism. HAIL HYDRA! https://t.co/JUfxxw0nJB

BREAKING: Tucker Carlson literally just told his viewers (sheep) that the documents related to a massive story they were teasing since Monday about Hunter Biden, were ‘lost in the mail’.

Did he hear about copy machines, PDFs dropbox and camera phones?

LOL Tucker wants his viewers to believe the super damning Hunter Biden info he had just disappeared without a trace.

I’m not kidding here. Tucker Carlson claims that he had extremely explosive Hunter Biden docs that prove Joe Biden is owned by China. But, he can’t show them to anyone now because…they suspiciously disappeared in the mail. pic.twitter.com/hQhoDEmyW1

this is actually important, beyond being comical: the reason the Hunter laptop story has gone nowhere is bc Rudy etc ***won’t produce** the laptop for reporters to confirm etc.

Previous Bannon Crony Sends Mobs After Chinese Dissidents
Next Kushner On Tape To Woodward: Trump Wanted States To Close So He Could Take Credit For The Reopening