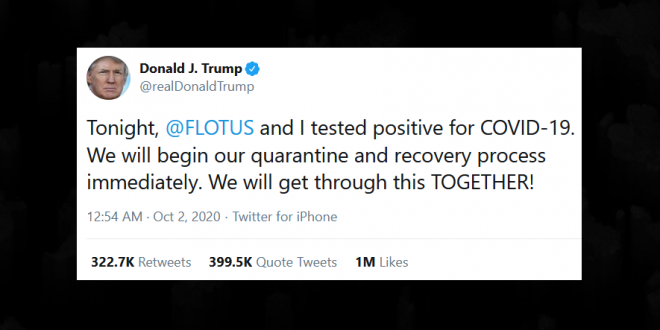 Trump’s COVID Reveal Is His Most “Liked” Tweet Ever

President Trump’s tweet on Friday announcing that he and First Lady Melania Trump tested positive for coronavirus quickly become his most retweeted and liked tweet ever The tweet — sent at 12:54 a.m. ET — set records while most of the nation was asleep, so it’s bound to get even bigger.

At that time, it had garnered over one million likes, making it his most “liked” tweet ever. Previously, the president’s most-liked tweet was a 2019 tweet announcing that rapper A$AP Rocky was released from prison and on his way home to the U.S. from Sweden.

Tonight, @FLOTUS and I tested positive for COVID-19. We will begin our quarantine and recovery process immediately. We will get through this TOGETHER!

Previous Trump Was In Maskless Close Contact With Dozens After The WH Learned His Aide Hope Hicks Was Sick [VIDEO]
Next Putin To Trump: Your “Inherent Vitality” Will Help You