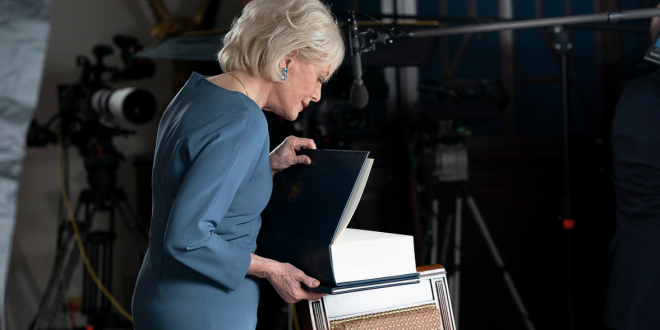 Trump famously held a press conference in 2017 flanked by what appeared to be stacks of blank papers, which he said were documents focused on transitioning control of the Trump Organization to his sons.

During Trump’s stay at Walter Reed for a coronavirus infection earlier this month, the White House released a photo – captioned “President Donald J. Trump Works from Walter Reed” – that appeared to show him signing his name to a blank sheet of paper.

Kayleigh McEnany presenting Lesley Stahl (@60Minutes) with some of the many things we’ve done for Healthcare. Lesley had no idea! pic.twitter.com/8bfIxkFiXt

Trump’s healthcare plan that he’s bragging about showing Lesley Stahl seems to be blank, like the fake papers he signed from Walter Reed, his divestiture documents, and the space where his brain should go pic.twitter.com/BGiNld66ft

The White House trying to make a good impression by handing Leslie Stahl a 2,500-page dossier of blank pages that was billed as Trump’s non-existent healthcare plan might just be the greatest metaphor for 2020.

Previous Spain Becomes First EU Nation To Top 1M COVID Cases
Next Rudy Giuliani: I Was Only “Tucking In My Shirt”