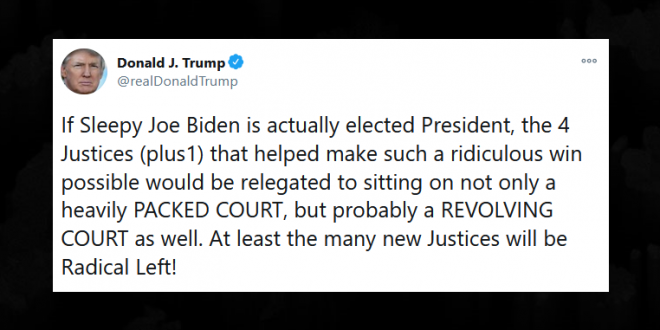 What the commander in chief is flatly saying is that the only way that Joe Biden is “actually elected President,” is if five Supreme Court justice were to help allow that to happen. This statement is the clearest indication that President Trump expects to take the results of next Tuesday’s general election to the courts, regardless of the outcome. It also puts in stark relief the rush to confirm Justice Amy Coney Barrett to the Supreme Court.

If Sleepy Joe Biden is actually elected President, the 4 Justices (plus1) that helped make such a ridiculous win possible would be relegated to sitting on not only a heavily PACKED COURT, but probably a REVOLVING COURT as well. At least the many new Justices will be Radical Left!