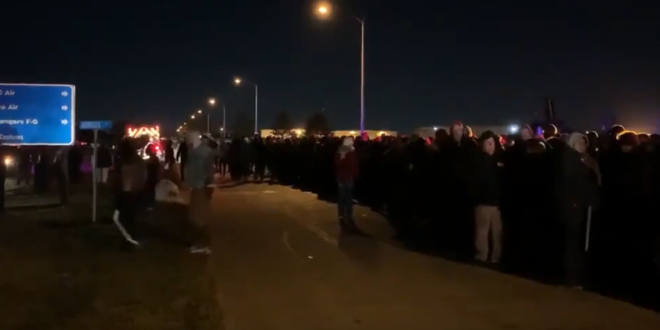 By the time President Trump finished speaking to thousands of supporters at Omaha’s Eppley Airfield on Tuesday night and jetted away on Air Force One, the temperature had plunged to nearly freezing.

But as long lines of MAGA-clad attendees queued up for buses to take them to distant parking lots, it quickly became clear that something was wrong. The buses, the huge crowd soon learned, couldn’t navigate the jammed airport roads.

For hours, attendees — including many elderly Trump supporters — stood in the withering cold, as police scrambled to help the most at-risk get to warmth. At least seven people were taken to hospitals, according to Omaha Scanner, which monitors official radio traffic

By 9 p.m. the event ended but many faced a 3.7-mile walk from TAC Air to the South Economy parking lot at Eppley. “Officers picking up people wandering in the cold unable to locate their vehicles and are taking them to various parking lots,” local news provider Omaha Scanner tweeted.

Medics were on hand to treat those, particularly the elderly, with visible medical issues as they walked out. “One officer advising 8 to 9 elderly people who are struggling. Separate officer advising they have located an elderly party who is frozen cold unable to move with an altered mental status.

If you aren’t paying attention to this absolute shitshow in Omaha in the wake of Trump‘s rally, you should be. They bussed supporters in then effectively left them to walk several miles in the cold back to their cars. Several taken to the hospital. This is Trump in a nutshell. https://t.co/4zeEuIaL1m

Thousands of people left out in the cold and stranded in #Omaha, #Nebraska after a #Trump rally. I’m told the shuttles aren’t operating & there aren’t enough busses. Police didn’t seem to know what to do. Some walked. I saw at least one woman getting medical attention. pic.twitter.com/oIkmixaZt0

Woman stranded at MAGA rally in Omaha says Trump wanted to teach them a lesson pic.twitter.com/SvqYw5MnOZ