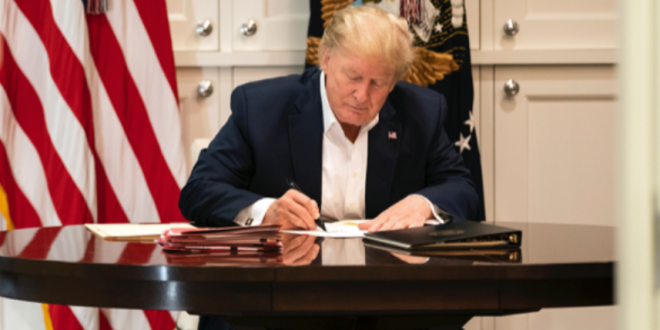 The Trump administration’s credibility crisis continues as the president is mocked for apparently signing a blank piece of paper with a marker in photos taken at Walter Reed military hospital, in a vain attempt to show him working while fighting coronavirus.

On Saturday night, the White House released photos of Donald Trump appearing hard at work while in hospital, where he remained for a second night after a “very concerning” period.

His daughter, Ivanka Trump, shared one of the photos on her Twitter, with the caption: “Nothing can stop him from working for the American people. RELENTLESS!” But Mr Trump’s attempts to appear undefeated by Covid-19 were quickly picked apart by eagle-eyes commentators.

NEW: The White House has released these photos which purport to show @realDonaldTrump “at work” at Walter Reed National Military Medical Center. pic.twitter.com/vSRcH7o2Hq

ZOOM: @realDonaldTrump appears to be signing his name to a blank sheet of paper in this photo. pic.twitter.com/xlNX24CXn4

The photos released by the WH tonight of the president working at Walter Reed were taken 10 minutes apart at 5:25:59 pm and 5:35:40 pm ET Saturday, according to the EXIF data embedded in both @AP wire postings that were shared by the White House this evening. pic.twitter.com/EzeqIkGdf7

If the shots were taken just 10 mins apart, and they used different locations and a costume change, the only things POUTS was working at were propaganda and Infecting the photographer.https://t.co/Negjig0nMy

Why? Why are they shuffling the POTUS to different rooms and removing his jacket for photo ops?

The logical answer I can come up with is that they’re exploiting semi-lucid moments for propaganda purposes.

Previous Pennsylvania GOP Sen. Pat Toomey To Retire In 2022
Next WH Won’t Say If Source Of Trump’s Infection Is Known