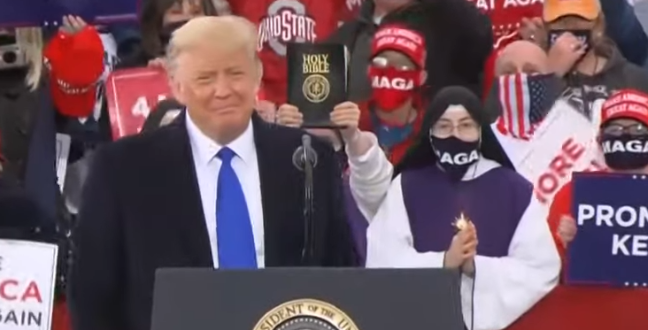 Trump Seats “MAGA Nuns” Behind Him At Ohio Rally

A group of Trump-loving nuns grabbed attention on social media Saturday after they were spotted wearing MAGA masks with their habits and cheering the president on in Circleville, Ohio. Three nuns were behind the president’s podium, two holding rosaries and a third holding a Bible. During the Republican National Convention, another nun, Sister Deirdre Byrne, called the president the “most pro-life president ever.” “President Trump will stand up against Biden-Harris, who are the most anti-life presidential ticket ever, even supporting the horrors of late-term abortions and infanticide,” she continued.

OMG the MAGA nuns behind him https://t.co/ONGnIz0QVy

Bizarre and disgusting. Positioning nuns wearing MAGA masks directly behind @realDonaldTrump at his Ohio rally. Are they praying for the hundreds of thousands of COVID deaths Trump is responsible for? pic.twitter.com/VossnghjnP

The nuns behind him clap after Trump says he’s tempted to run into the audience and start kissing people pic.twitter.com/1ScXmWssxn