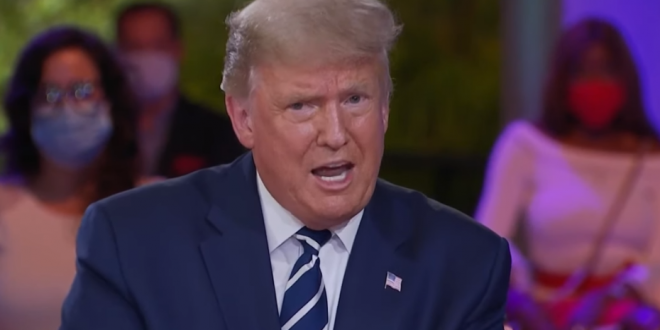 President Donald Trump likes to dabble in conspiracy theories, and he does not like to contradict his base. So it should come as no surprise that the president tonight refused to denounce the warped conspiracy-theory movement known as QAnon, which posits that a global cabal is torturing children, and which exalts Trump as its savior.

Yet if Trump no longer has the power to surprise, he still has the power to shock. He proved that once again tonight, when NBC’s Savannah Guthrie confronted him about Q during the network’s town hall, as Trump first claimed not to know what QAnon was and then voiced sympathy with its supposed central tenet.

President Donald Trump doubled down on his refusal to denounce QAnon conspiracy theorists, saying in a nationally televised town hall Thursday night that “they are very much against pedophilia” and he agrees with that sentiment. In a heated exchange, NBC News’ Savannah Guthrie asked Trump if he could state that the prevailing conspiracy devised by QAnon was not true. “I know nothing about QAnon,” Trump responded. “I just told you,” Guthrie said.

Trump fired back, saying, “What you tell me doesn’t necessarily make it fact.” QAnon’s main conspiracy theories — none based in fact — claim dozens of Satan-worshipping politicians and A-list celebrities work in tandem with governments around the globe to engage in child sex abuse. Followers also believe there is a “deep state” effort to annihilate Trump and that the President is secretly working to bust these pedophilic cabals.

At the same moment that Trump was refusing to disavow QAnon, Biden on ABC was saying that “when a president doesn’t wear a mask, or makes fun of folks like me when I was wearing a mask for a long time, then people say it mustn’t be that important.” A jarring contrast. pic.twitter.com/rqppKQDUrs

Nobody in QAnon World is “fighting” pedophilia at all. They are simply accusing everyone they don’t like of *being* pedophiles. There is a difference. https://t.co/XhUogbhxyt

Previous CHATTER AWAY: Overnight Open Thread
Next Trump Defends Claim Bin Laden Is Still Alive: That Was A Retweet, People Can Decide For Themselves [VIDEO]