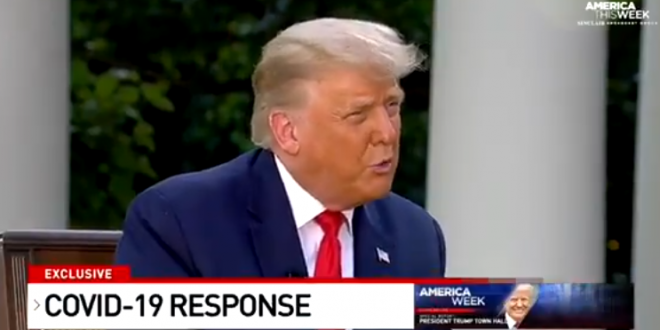 Trump: No Regrets On My COVID Response [VIDEO]

Following his 60 Minutes interview Tuesday, President Donald Trump sat down with Sinclair’s Eric Bolling for a town hall talking about a number of issues, including the U.S. coronavirus response.

Bolling asked, “With COVID, is there anything that you think you could have done differently — if you had a mulligan or a do-over on one aspect of the way you handled it, what would it be?”

In 2017 Bolling was ousted from Fox News in a sexual harassment scandal. On his Fox program Bolling promoted birtherism and the Seth Rich conspiracy theory.

Not sure what all the fuss was about today with @60Minutes and @realDonaldTrump .. He seemed perfectly fine at my TownHall- taped just minutes after he finished with @cbs.