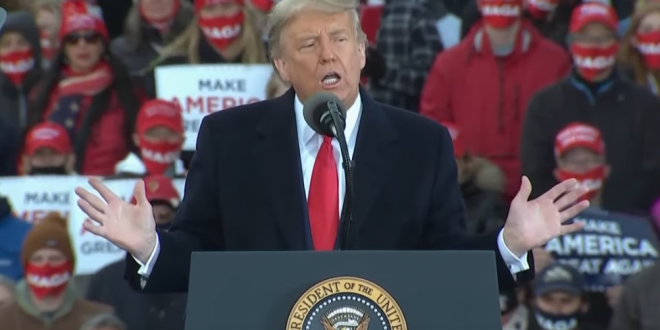 Trump Is Trying To Get Michigan’s Governor Killed

It’s been less than a month since the FBI thwarted a plot to kidnap and possibly kill Gov. Gretchen Whitmer (D-MI), but President Donald Trump is still making fun of her.

At his Saturday rally, he mocked her support of people wearing masks to help prevent the spread of the COVID-19 pandemic. The crowd began chanting, “lock her up,” a theme they often used when Trump brought up former Sec. Hillary Clinton. “Lock her up, heh,” Trump chuckled, allowing the chant to continue.

It wasn’t just Whitmer who was at risk for an assassination attempt. The militia members also hoped to blow up the Michigan capitol, which would have killed hundreds of legislators, staffers, and workers from both sides of the aisle.

Trump’s supporters erupted into chants of “lock her up” — a refrain from the 2016 campaign originally lobbed at Hillary Clinton, but since repurposed against Whitmer and other high-profile Democrats — which Trump did little to dissuade.

“Lock ‘em all up,” he said before pausing to soak up energy in the crowd. The striking visual quickly came to Whitmer’s attention, who responded while the president was still speaking.

“This is exactly the rhetoric that has put me, my family, and other government officials’ lives in danger while we try to save the lives of our fellow Americans,” she tweeted. “It needs to stop.”

I am the Governor’s Deputy Digital Director. I see everything that is said about and to her online.

Every single time the President does this at a rally, the violent rhetoric towards her immediately escalates on social media.

It has to stop. It just has to. https://t.co/eupQXzGydN

Governor @GovWhitmer’s life was threatened and a kidnapping plot was recently disrupted by the @FBI. Yet @realDonaldTrump is trying to incite more violence. How can @GOP leadership sanction this through their silence? VOTE

Bill Barr, Chris Wray, and other senior law enforcement officials in the Trump Administration: Perhaps you could speak up to deplore the president’s reckless and dangerous rhetoric and apparent calls for vigilantism, especially in light of the recent plot against Gov. Whitmer?

They literally JUST arrested domestic terrorists for a plot to kidnap Michigan’s Governor Gretchen Whitmer, and trump had a large crowd of idiots chanting “lock her up” today.

The “president” is a terrorist.