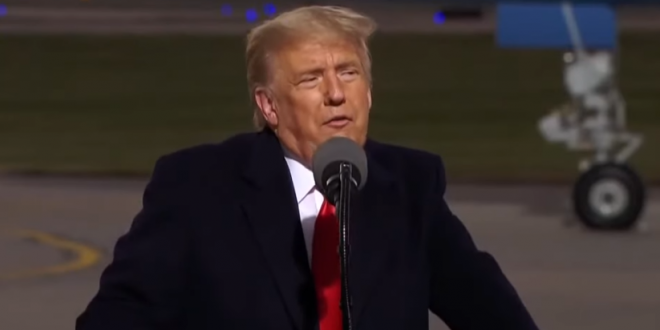 “All because the governor wants to play games,” the president said before shaking hands and tossing campaign hats to supporters in an overflow area at a rally at the Rochester International Airport on Friday.

“He’s a weak governor, he’s done a terrible job, he doesn’t know what the hell he’s doing,” he said. Following a 22-minute speech racing through his applause lines, the president returned to Air Force One.

Trump’s Minnesota rally was just 21 minutes long, which has to be the shortest of the campaign for him by far.

(The crowd was smaller because of a Covid-related order from the governor. Trump criticized the order and the governor. He normally feeds off crowds.)

Maybe it’s the small crowd. Maybe it’s the cold. But this is the lowest energy I’ve ever seen the President be at a rally. He’s blowing through his applause lines, just checking the boxes on his usual speech, like he’s got somewhere to be. pic.twitter.com/iZyj6YSlLp

🚨 WATCH: Even the president’s defenders can’t find a way to spin a very bored, low-energy Trump ending a rally after 21 minutes. #TrumpRally pic.twitter.com/qX00dDK3is

Previous US Again Breaks World Record With 100,000 New Cases
Next Trump Admin Rejected Celebrities For PSA Campaign If They Had Backed LGBTQ Rights Or Marriage Equality