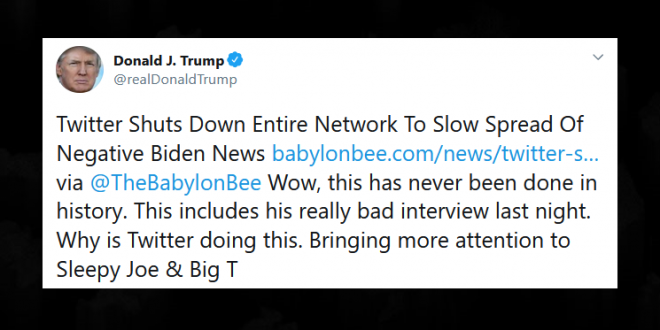 The story tweeted by the president early Friday morning was published by The Babylon Bee — which bills itself online as “the world’s best satire site” — and stated that Twitter had “shut down its entire social network” Thursday to stop the spread of negative news about Biden.

Twitter Shuts Down Entire Network To Slow Spread Of Negative Biden News https://t.co/JPmjOrKPcr via @TheBabylonBee Wow, this has never been done in history. This includes his really bad interview last night. Why is Twitter doing this. Bringing more attention to Sleepy Joe & Big T

As the nation sleeps, Trump claims that Twitter crashed itself to save Joe Biden from the New York Post. His source is a satirical article from the Babylon Bee, a right-wing Christian version of The Onion. https://t.co/Tg9UjokR1w