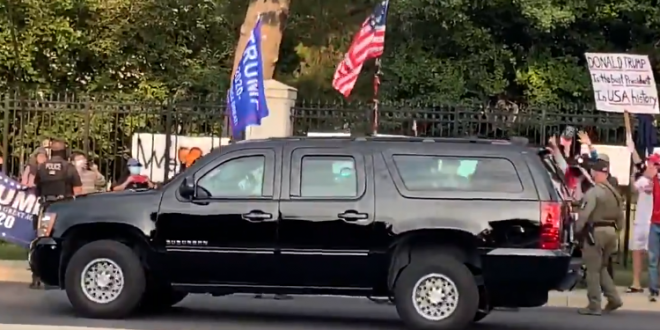 Trump Does Pathetic Driveby For His Cultists [VIDEO]

Determined to reassert himself on the political stage on his third day in the hospital, Mr. Trump made an unannounced exit from Walter Reed National Military Medical Center in the early evening, climbing into his armored Chevrolet Suburban to ride past supporters holding Trump flags gathered outside the building. Wearing a suit jacket and face mask but no tie, Mr. Trump waved at the crowd through a closed window as his motorcade slowly cruised by before returning him to the hospital.

“Every single person in the vehicle during that completely unnecessary Presidential ‘drive-by’ just now has to be quarantined for 14 days,” Dr. James P. Phillips, an attending physician at Walter Reed, wrote on Twitter. “They might get sick. They may die. For political theater. Commanded by Trump to put their lives at risk for theater. This is insanity.” In a telephone interview on Sunday night, Dr. Phillips also said the trip raised the alarming question of whether the president was directing his doctors.

White House press secretary Kayleigh McEnany defended the move in an interview with Fox News, saying Trump “wanted to thank his supporters” and “give confidence to the American people that their Commander in Chief can get through this.” She did not respond to questions about safety concerns.

Jason Miller, a top adviser to the Trump campaign, insisted in an interview with CNN that Trump drove by in “a safe way,” but he was unable to answer questions about what precautions were taken to keep the Secret Service agents safe.

The Walter Reed drive by proves once again that Trump has learned nothing about this virus. His narcissism will never allow him to lead us through this crisis. He will continue to endanger the lives of others until we vote him out.

i suspect this drive through is going to haunt Trump. not because he needlessly exposed a lot of people but because for someone so image conscious he looked ridiculous. a slow speed drive by by sick old man needing a boost from a small crowd of fans. not a good look.

Trump’s ride will be talked about 30 years from now like it happened yesterday. It will be viewed as the worst photo op in Presidential History. It speaks perfectly to his sociopathy, recklessness, neediness and the extremes of his movement. @ProjectLincoln looks forward to

My father died of Covid alone in a hospital. I had to say goodbye to him over a phone. Trump got a joyride to sooth his desperate need for attention, while endangering the lives of the Secret Service people in the car with him. To hell with him and all who enable him.

There is no bottom with @realDonaldTrump.

Even hospitalized, he manages to sink lower and lower.

Trump is contemptible. He endangers others and flaunts his privilege, riding around waving like Queen Elizabeth from her chariot. Other Covid patients were alone in hospital, unable to leave. Some said good-bye to loved ones on facetime, and died with nobody holding their hand.