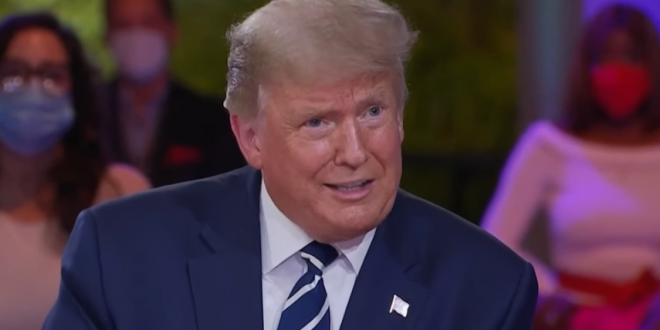 Trump Defends Claim Bin Laden Is Still Alive: That Was A Retweet, People Can Decide For Themselves [VIDEO]

Guthrie pressed Trump on his penchant for tweets that spread disinformation, including one post he retweeted that contained a conspiracy theory that former Vice President Joe Biden and President Barack Obama orchestrated a cover-up that included the Navy SEAL Team Six faking the death of terrorist Osama bin Laden.

“That was a retweet. That was an opinion of somebody and that was a retweet. I’ll put it out there. People can decide for themselves. I don’t take a position,” Trump said in defending his tweet. “You’re the president,” Guthrie responded. “You’re not someone’s crazy uncle who can retweet whatever.”

Pres. Trump: “That was a retweet, I’ll put it out there. People can decide for themselves.” @SavannahGuthrie: “I don’t get that. You’re the president. You’re not, like, someone’s crazy uncle who can just retweet whatever.” #TrumpTownHall pic.twitter.com/Im0QFy7VOU

On spreading the conspiracy that Obama had SEAL Team 6 killed.

TRUMP: “That was a retweet! People can decide for themselves!”

President Trump says he knows nothing about the crazy conspiracy he retweeted this week claiming Obama and Biden “had SEAL Team 6 killed” and that Osama bin Laden’s death was a hoax. “I’ll put it out there. People can decide,” he says.

What’s even weirder is that at least one member of Seal Team Six is going to vote for Trump, a president who argues that Seal Team Six has been murdered. https://t.co/UhQMjnlnm6