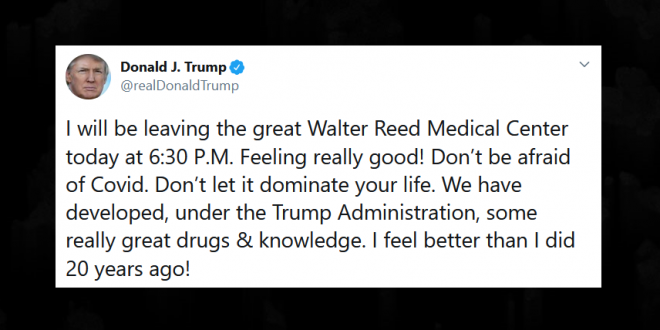 Trump Claims He Will Leave Hospital This Afternoon

President Trump announced that he will return to the White House on Monday night after spending the past three days at Walter Reed National Military Medical Center in Bethesda, where he has been receiving treatment for covid-19.

The move comes even as several other members of the Trump administration —including press secretary Kayleigh McEnany and at least two other White House communications aides — have tested positive for the virus.

White House physician Sean Conley said Sunday that Trump’s condition had “improved,” but he noted that the president had drops in his blood oxygen levels Friday and Saturday and was given treatment typically reserved for severely ill patients.

I will be leaving the great Walter Reed Medical Center today at 6:30 P.M. Feeling really good! Don’t be afraid of Covid. Don’t let it dominate your life. We have developed, under the Trump Administration, some really great drugs & knowledge. I feel better than I did 20 years ago!