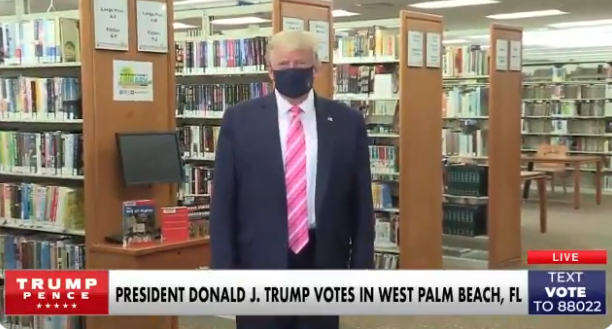 President Donald Trump is casting his vote this morning at the Palm Beach County main library on Summit Boulevard. It marks the first time an incumbent president votes, in-person, in Florida.

Trump did vote in both the March 17 presidential primary and the Aug. 18 general primary, but those ballots were sent as absentee votes. In 2016, Trump cast his vote at a public school voting location in Manhattan

As Trump cast his vote Saturday, his campaign, Florida Trump Victory, hosted a handful of “Trump the Vote” early voting events throughout the state led by top GOP officials, including Gov. Ron DeSantis in Naples.

Some have questioned whether he can legally vote as a Florida man because his Mar-a-Lago estate in Palm Beach is taxed as a private club and not as a residential property. Jim Watson, a Boynton Beach resident, filed an elections fraud complaint in June challenging Trump’s ability to vote in Florida. Palm Beach County Supervisor of Elections Wendy Link says Mar-a-Lago’s zoning status is irrelevant in whether he can register to vote using that address.

“Whether a person considers that location his or her home is what matters,” Link said. “For voting purposes, a voter can claim a park bench as their residence, if that is where they spend their time.” Bob Jarvis, a law professor at Nova Southeastern University, agreed with Link’s interpretation. “The Florida Election Code does not define the term legal residence,” he said. “As such, it is up to the SOE [supervisor of election] to determine where a person lives.”

Pres Trump arrives at early voting location in West Palm Beach near his Mar-a-Lago residence to cast his ballot in the 2020 election. The Pres had planned on voting by absentee ballot, but said yesterday he was looking forward to voting in person. pic.twitter.com/HFwWiPLLXp

Trump heads inside to vote at a location in West Palm Beach pic.twitter.com/7YEZLLSmJ1