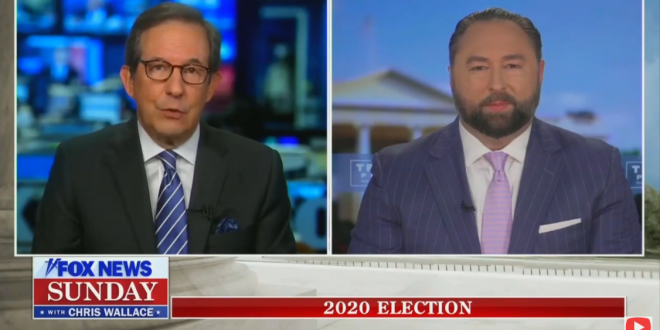 Trump Campaign Flack: Voters Hate It When People “Make A Lot Of Money Trading On Their Family Name”

“The fact is Vice President Biden has actually released his tax returns, unlike President Trump and there’s no indication he’s gotten any money from anyone in these business deals,” Wallace noted.

In response, Miller cited a disputed New York Post story published last week about Hunter Biden and then invoked Hillary Clinton, saying “Voters hate it when people make a lot of money trading off of their family name.”

We’ve passed the silly season and have entered the completely unhinged ridiculous season of politics and Jason Miller is the perfect spokesperson for these time. BTW — voters also hate deadbeat dads. https://t.co/uiMBRhVFt3

Previous RNC Chair Claims Terrorists Who Plotted To Kidnap And Murder Michigan Governor Have “No Political Affiliation”
Next Pete Buttigieg: My Marriage Might Depend On What’s About To Happen In Senate With Amy Coney Barrett